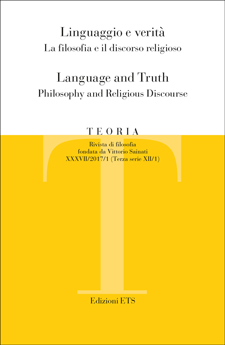 The essay tries to bring into study the “metaphysics of voice”, of which Corrado Bologna had spoken years ago in his Flatus vocis, whose speculative summit is reached and expressed in the pages entitled “The Voice of Love”. In order to become σὰρξ (Sarx) the λογος (Logos) must become and express himself as φωνή􀀀 (Voice), and as incarnated It represents the “absolute paradox”, i.e. the most radical confrontation against every gnostic temptation. That prologue, which is a “conclusion” of the Forth Gospel, reaches us in such a way to put out the question of the existence of God, in an ontotheological sense, on which Philosophy and the so-called “rational Theology” devoted much energy. What we urgently need instead is a “speculative theology”, capable of going beyond, by crossing them through, the intricacies of both Ontotheology and Philology. Too much time and resources have been wasted in attempts to prove the existence of God and in the exegesis of texts, depriving the existence of the listening to the “voice”, which precedes and inaugurates the word, allowing the embodiment of thought. This way, one can grasp, albeit broadly, the metaphysical valence of the Christological event, through a path that leads from the reflection on the metaphysics of voice to the sacramentality of the Word itself, assuming as conjunction the analogia Verbi (Analogy of the Word), disclosing through it both the cosmic-anthropological and the historical-eschatological dimensions of the Hebraic-Christian Revelation, whose fruitfulness for the philosophical thought requires to be inhabited and further articulated.